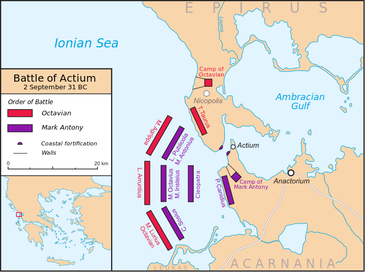 Setup
Octavian's naval forces were led by his friend and skilled veteran Marcus Vispanius Agrippa. While Octavian marched east with his army, Agrippa started to raid the Greek coastline. Antony's fleet moved to the Gulf of Ambracia near Actium in response, and Agrripa sailed to the south to attack Messenia, further disrupting Antony's supply lines.

Octavian arrived at Actium with his army and established an encampment on the high ground north of the gulf, but he was unable to successfully attack Antony's camps to the south. Meanwhile, Agrippa established a blockade to cut off Actium, resulting in a stalemate for several months.

As the stalemate dragged on and supplies decreased, Anonty's officers and supporters began to defect.  One of the defecting officers was one of Antony's generals, Quintus Dellius,  who joined Octavian's side bringing with him all of Antony's battle plans.

In danger of losing more supporters to the lack of supplies, Antony attacked Agrippa's fleet in an attempt to break the blockade on September 2, 31 BC, resulting in what is known as the Battle of Actium.
Statistics 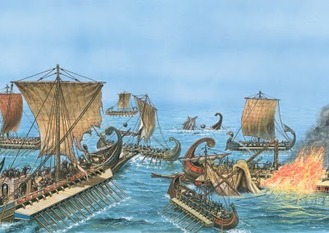 The main difference between the two fleets was the type of galleys deployed. Antony's fleet was mostly made up of quinqueremes, which were slow, heavily armored, and hard to manever. Quinqueremes were made to ram other ships. Agrippa's fleet was made up of small, maneuverable Liburnian warships, which couldn't ram and sink quinqueremes, but they were fast enough to avoid getting rammed.

Neither side could ram the other, which was the usual Roman means of a naval attack. The battle essentially became a land battle at sea with hundreds of ships fighting in a small area of water. The battle dragged on for hours without either side gaining an advantage.

The battle drew to a close when Cleopatra and her sixty ships abandoned the battle. Antony quickly followed his lover with another forty ships. With both their commanders gone and having lost one hundred ships. Antony's fleet was quickly overcome by Agrippa and surrendered.
Video Summary
Powered by