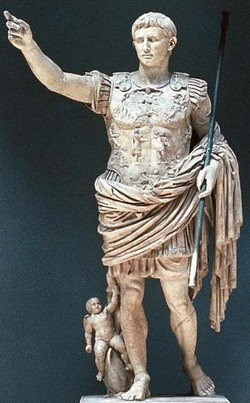 The young man known as Octavian, and eventually the emperor Augustus, was born to a Plebeian family in Rome in the year 63 BC.  Octavian was a sickly boy and remained prone to illness throughout his life, but this did not prevent him from entering Roman politics at an early age and becoming close friends with his great-uncle, Julius Caesar.  Octavian was fond of his great-uncle and Caesar was close to the young man because he did not have any male heirs, which is why he adopted Octavian as his son shortly before he was assassinated.

After Caesar's assassination, Octavian was thrown into the middle of the political turmoil in Rome because of his relation to the late dictator, but due to his young age he was not taken as seriously as Mark Antony, who was a proven general and loyal follower of Caesar.  The young Octavian and the seasoned Antony put aside their differences and formed the Second Triumvirate along with Marcus Lepidus in 43 BC to fight against the assassins of Caesar, namely Brutus and Cassius.  In 42 BC the young Octavian and Mark Octavian confronted Brutus and Cassius at Philippi, Greece and subsequently defeated them.  Upon the deaths of Caesar's assassins, the triumvirs divided the Republic among them and Octavian received the west.  During the next decade, he put down several minor conflicts throughout the western Mediterranean, most notably Agrippa's defeat of Sextus Pompey at Naulochus in 36 BC.  The defeat of Sextus Pompey signified the end of any Pompeian resistance in Rome and secured the western Mediterranean for Octavian after Lepidus' men defected to his side, leaving him and Antony as the two sole rulers of Rome

After removing Lepidus from the triumvirate, Octavian clearly had the Senate on his side and was ready to take down his other political rival, Mark Antony.  Octavian presented the Senate with information about Antony's activity in Egypt and how he appeared to be favoring the priorities of Egypt over Rome itself.  He also pointed out the fact that Antony was married to a foreign woman even though he was married to a Roman woman named Octavia, who happened to be Octavian's sister.  The final piece of evidence he showed against Antony was his will that left all Roman territories in the east to his his children with Cleopatra and his tomb was to be in Alexandria.  The Senate was appalled by the information about Antony and declared him an enemy of Rome.  Octavian and Agrippa set out to to face off against Antony and Cleopatra in order to solidify his position as the sole ruler of Rome.  On September 2, 31 BC Agrippa led Octavian's forces against Antony in a decisive victory at Actium that positioned Octavian as the sole ruler of Rome and destroyed any hope Antony had of ruling the east in peace.  Octavian assumed full control of Rome after Antony and Cleopatra committed suicide and from that point he continued to settle minor conflicts throughout the Mediterranean,

The year 27 BC officially marked the end of the Republic and the start of the Empire when Octavian was given the title of Augustus and became Rome's first emperor.  Augustus was considered by most historians to be Rome's greatest emperor because of his foreign and domestic policies that started the 200 year time span known as the Pax Romana (Roman Peace), marked by economic and military success.  Augustus took on the difficult task of transitioning a 500 year old republic into an empire with a central ruler and did so by slowly assuming powers held by different offices and maintained a good relationship with the Senate.  On his deathbed, he famously told his men to stop expanding the borders of the empire because he felt that Rome would be too large to govern, which is what some historians believe led to its eventual collapse hundreds of years later.  Augustus, along with Julius Caesar, is a symbol of Ancient Rome's power and success because he was sensible and trusted his officials to help him rule the new empire. 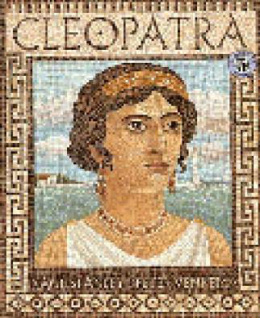 Born to the ruler of Egypt, Ptolemy XII and his wife Cleopatra V, Cleopatra grew up in the city of Alexandria along with her brother Ptolemy XIII.  When her father died, Ptolemy XIII assumed leadership of Egypt at the age of ten and she struggled to maintain a good relationship with him.  Tensions grew so great between the two siblings that Cleopatra eventually went into exile because she had lost influence and power in Egypt.  She soon afterwards allied herself with Julius Caesar when he sailed to Egypt in order to capture the defeated general, Pompey the Great.  Ptolemy XIII had Pompey murdered because he felt that it would ally himself with Caesar, but in reality it angered the general and he ended up deposing the young ruler.

Julius Caesar was fond of the cunning Cleopatra and restored her to power after removing her brother, and the two had an affair that resulted in the birth of Caesar's only son, Caesarion.  Cleopatra and her new son lived in Rome for a while, until Caesar was assassinated on the Ides of March and she quickly fled to Egypt for fear that she might be the next target of an attack.

While back in Alexandria, Cleopatra began a relationship with the triumvir Mark Antony and ended up having three children with one of the most powerful Romans of the time.  While Octavian was fighting minor civil wars in the west, Cleopatra and Mark Antony solidified their control of the east  and began to put Egypt's needs in front of those of Rome.  Octavian and Antony's relationship had dissolved over the years, and the young great-nephew of Caesar convinced the Senate that Antony had given up his allegiance to Rome and was serving a foreign nation and his foreign wife.  Cleopatra and her new husband were now enemies of the greatest power in the Mediterranean and this conflict would build up to the decisive battle of Actium off the coast of Greece on September 2, 43 BC.

The Egyptian queen's forces and those of Antony were defeated by Octavian and Agrippa, and with this defeat the couple returned to Alexandria.  Cleopatra famously killed herself by having a poisonous asp bite her arm as her city was sieged by forces of Octavian and her husband committed suicide as well.  The death of Cleopatra marked the end of the pharaohs and the Ptolemaic dynasty in Egypt, and soon afterward her son Caesarion was murdered by Octavian to eliminate any possible claims to Julius Caesar and his power.  After her death, Egypt became a province of Rome that served as the empire's breadbasket and supplied Rome with much of its grain supply from farms on the Nile River.  Cleopatra was a polarizing figure in classical antiquity and still remains a symbol of seductiveness, wealth, beauty, and power in popular culture. 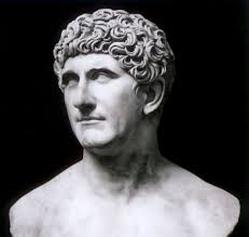 The famous lover of Cleopatra was born in the late first century BC to a minor Roman politician and lived a decadent youth that circled around heavy gambling.  Antony was an educated man and began his political career when he served in Caesar's army during the Gallic Wars, where he assumed several offices.  He became very close to Caesar during this time and even served as his magister equitum when Caesar was dictator.  While Caesar was fighting the remaining Pompeian forces across the Mediterranean, Antony was given command of the entire Italian peninsula and several conflicts broke out in Rome that resulted in Antony's excessive use of violence.  Many Romans were killed during Antony's rule over Italy and Caesar was very upset when he saw that one his most loyal followers was unable to peacefully govern Italy.

Antony remained loyal to Caesar until his assassination in 44 BC when a mob led by Brutus and Cassius brutally stabbed the dictator at the Theater of Pompey.  Antony was initially declared an enemy of the state after Caesar's assassination because he attempted to take control of Cisalpine Gaul for Decimus Brutus, an assassin of Caesar.  Antony resolved his conflict with the Senate by deciding to join forces with the young Octavian, Caesar's great-nephew and adopted son, as well as Marcus Lepidus.  The three men formed the Second Triumvirate, and in 42 BC Antony and Octavian defeated Brutus and Cassius at the battle of Philippi, thus ending any chance of Caesar's assassins assuming control of Rome.  Antony, Octavian, and Lepidus split up the Roman territories with Antony receiving the eastern Mediterranean.  The triumvir quickly became acquainted with Cleopatra, queen of Egypt and former lover of Caesar, and began an affair with her in Egypt.  Antony ended up having three children with Cleopatra, even though he was married to Octavia, Octavian's sister,  and fought several failed campaigns against the Parthians.  Antony had grown very fond of his new Egyptian wife and children, which upset the Senate and Octavian used his relationship with Cleopatra to have him declared an enemy of the state again.

The Senate sent Octavian to defeat Antony and reclaim the Roman territories in the east that Antony was in control of and had promised to his Egyptian family in his will.  Antony was a competent general, but was unable to defeat Agrippa at the battle of Actium and was forced to flee back to Alexandria with Cleopatra.  Octavian reached Alexandria and sieged the city until it eventually Antony realized that he would not be able to defeat his former ally and killed himself to avoid being captured.  The defeat of Antony symbolized the end of any major threats to Octavian's command of Rome and his wife Cleopatra killed herself soon after he died.  Antony is remembered as a capable general and soldier, but often fell to several temptations, such as women and gambling, as well as being prone to use violence rather than compromise. 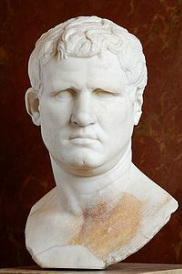 Octavian's most trusted general and adviser had humble beginnings, but began his rise to power when he began to go to school with the future emperor.  Agrippa fought alongside Octavian's great-uncle, Julius Caesar, in the civil war and after his assassination he solely served Octavian.  He commanded most of the battles that Octavian is given credit for because he was very sickly and often could not be on the battlefield.  Agrippa fought with Octavian and Antony at the battle of Philippi against Brutus and Cassius, and continued to fight for his lifelong friend.  Agrippa won several battles for Octavian after Philippi, namely the battle of Naulochus, where Sextus Pompey and the remaining republicans where driven from their stronghold on Sicily.  The greatest military victory of Agrippa, however, was won on September 2, 31 BC off the coast of Actium, where he defeated the combined forces of Mark Antony and Cleopatra.

After Antony and Cleopatra were dead, Agrippa continued to fight for Octavian and became his chief adviser once he assumed the title of Augustus and became the first emperor of Rome.  Augustus married his only daughter, Julia, to Agrippa and had several children with him.  Agrippa would end up becoming the grandfather and great-grandfather the future emperors Caligula and Nero, respectively.   Early in Augustus' reign as emperor, Agrippa was named heir to the throne when Augustus believed that he was going to die from an illness, demonstrating the trust and confidence in Agrippa's leadership.  His most lasting contribution to Rome was the construction of the Pantheon, which was a temple dedicated to all of the gods and later built by the emperor Hadrian and is now a major tourist attraction in Rome today.  Agrippa was a great general and leader that was responsible for most of Octavian's military victories and was his closest friend.
Powered by