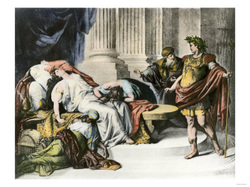 Cleopatra's suicide
The Birth of an Empire
The Battle of Actium bares its significance in that it marks the end of the Roman Republic and the beginning of the Roman Empire.

After a string of defeats following Actium, Antony committed suicide by stabbing himself and died in Cleopatra's arms. Cleopatra, refusing to be subjugated by Octavian, committed suicide as well, having herself bitten by a poisonous asp (a snake). As a result of Antony's death, Octavian became the sole power in Rome. Octavian later had Caesarion murdered by strangulation, used Cleopatra's treasures to pay off his veterans, and annexed Egypt.

On the 16th of January 27 BC, Octavian became the first Emperor of Rome and was given the names: Augustus, meaning 'the revered', and Princeps Civitatis, meaning 'The First Citizen'.  Augustus established a new constitutional framework known as the Principate, which was somewhat a continuation of the former Republic of Rome and would last until 284 AD. After many years of civil war preceding Julius Caesar's assassination in 44 BC, Augustus' rule would bring about an era of peace known as the Pax Romana. 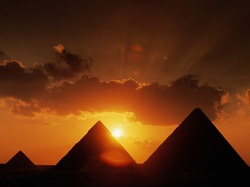 Impact on Egypt
When Octavian had Cleopatra's son, Caesarion, killed, he ended a 4,000 year old tradition in Egypt. The line of Pharaohs ended with Cleopatra's death, and Egypt was annexed into the Roman Empire led by Octavian.  During the empire, the province of Egypt would serve as private property of the emperor and the source of Rome's valuable grain supplies.

Cleopatra and Antony's children were brought to Rome to be paraded in Octavian's triumph and were taken care of by Octavia, who was now a widow. Alexander Helios died at the age of 15 and Ptolemy Philadelphus at the age of 7. Cleopatra Selene II married Juba, the Berber King of Mauretania.
Powered by