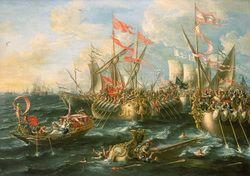 Painting of the battle
The Battle of Actium occurred on September 2, 31 BC. It was a naval battle fought between Octavian's forces and the combined forces of Mark Antony and Cleopatra VII on the Ionian Sea near the Greek city of Actium. 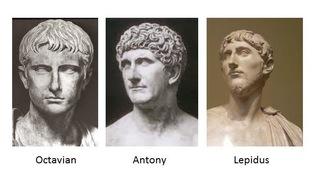 The three members of the Second Triumvirate
Formation of the Triumvirate
After the assassination of Julius Caesar in 44 BC by the conspirators Brutus and Cassius, Rome plunged into civil war. In an attempt to end the fighting, the Second Triumvirate was formed as an official five year political alliance. It's members were Octavian, Caesar's chosen heir and great-nephew, Mark Antony, a powerful general, and Marcus Aemilius Lepidus, a Roman statesman.

The Triumvirate defeated the conspirators' forces at Philippi in 42 BC. And in 40 BC, the empire was divided between the three members, under the Treaty of Brundisium. Octavian ruled the western province, Antony commanded in the east, and Lepidus was given control over North Africa and Spain. Although renewed for another five years, tensions between Octavian and Antony would continue to rise over the next couple of years and would lead to a head after the expiration of the Second Triumvirate. 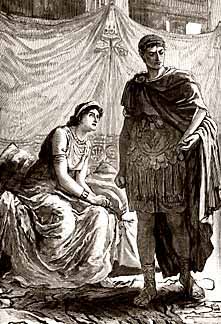 Antony and Cleopatra
Antony's Political Fumbles
In 41 BC, Antony spent a winter in Egypt with Cleopatra, and in 40 BC returned to Rome and married Octavia, Octavian's sister, in an attempt to relieve some of the tension between the two leaders. In December of that year, Cleopatra gave birth to twins, Alexander Helios and Cleopatra Selene II. And 3 years later, Antony left Rome to join Cleopatra and his children, in the east without divorcing Octavia.

By moving back to the East, marrying Cleopatra by Egyptian rite and having yet another child with Cleopatra, named Ptolemy Philadelphus, Antony aroused the suspicions of many Roman politicians to believe that he was attempting to become the ruler of Egypt and other eastern kingdoms while continuing to exert control over the eastern Roman legions.

Antony continued to antagonize Octavian by attempting to name Cleopatra's son, Caesarion, as the true heir to Julius Caesar. In 34 BC Antony led a successful campaign against Armenia. He celebrated by having a procession in Alexandria, which involved seating himself and Cleopatra on golden thrones and giving their children royal titles, such as Caesarion's title 'King of Kings', which unsettled Octavian and other Roman politicians.
Lepidus's Removal

In 36 BC, Lepidus raised up an army of 14 legions to help Octavian subdue a revolt in Sicily led by Sextus Pompeius. After putting an end to the uprising, Lepidus saw an opportunity to take control of Sicily for himself but Octavian, who was favored by the Senate, quickly used this as an excuse to depose Lepidus from the ﻿Triumvirate. Octavian accused Lepidus of usurping power in Sicily and attempted rebellion, and thus had all offices, but the Pontifex Maximus, stripped from Lepidus who would spend the rest of his life in exile.

Once Lepidus was removed from the Triumvirate, control of Rome was left in the hands of heated rivals: Octavian and Mark Antony; and whoever came on top would become the sole ruler of Rome.
Octavian's Propaganda

Octavian began to fear Antony's growing influence in the east, so he started a propaganda war to turn the Senate and the people of Rome against Antony. When Antony left Rome and Octavia to be with Cleopatra, Octavian claimed that Antony had married Cleopatra which violated the Roman law prohibiting Romans from marrying foreigners.

Octavian used Antony's will to denounce Antony as an enemy of Rome. Octavian's propaganda claimed that Antony sought to establish a personal monarchy over the entire Roman Empire on the behalf of Caesarion, circumventing the Roman Senate, and that Antony wanted to move the capital to Alexandria.

Rather than declare war on Antony, and consider this yet another civil war, Octavian's propaganda eventually moved the senate to declare war on Cleopatra, and therefore unofficially, Antony, in 31 BC.
Powered by